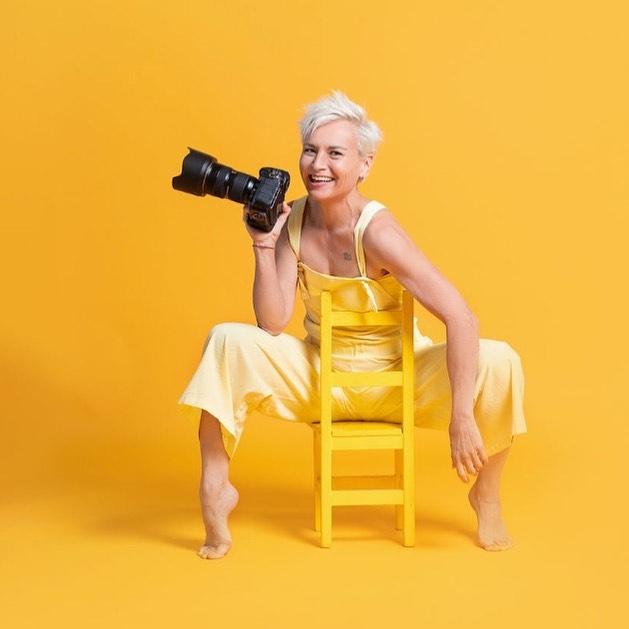 Sandy Weatherall does not sit still. An avid skydiver, yogi, martial artist, and commercial photographer, she has photographed everything from pets, to portraits, to candy-coated donuts and exploding smoothies. The one-woman creative force behind Jinsei Media, Weatherall is not afraid of the unconventional — from compositions, to creative concepts.

“I see all things differently,” she says.

A 30-year photography professional, she now takes that same approach with the aspiring photographers she teaches — whether preaching the merits of macro photography or how to turn dishes into drool-inducing works of art.

We spoke with Weatherall about the secrets of food photography, what makes a good photographer, and “watching the light bulbs go on.”

This interview has been lightly edited for clarity.

I want to start with a routine of yours, which I think gives a good introduction into who you are. You stand on your head every day. How did that start, and why do you do it?

SW: I don’t know if you’re familiar with the book The Artist’s Way, which is a great one for any creative person. [It’s] written by Julia Cameron. She says creative people should start purging all the stuff that’s in their head first thing in the morning, and then that leaves space for creativity. She writes from a writer’s point of view, but it’s applicable to anyone.

So I start with my morning pages: three pages of purging, and sometimes, you literally write “blahblahblah.” Then I meditate for anywhere from ten minutes to a half-hour. And then while my shower’s warming up, I stand on my head [laughs]. And that came from yoga. I’m a big yoga practitioner — in fact, that’s another side-business [of mine].

And the purging on the page is simply to get any thoughts out of the brain?

SW: Yeah. You know the thoughts like, “oh, I have to go do laundry later today.” The kind of pointless chatter that we all have. And [emptying] that leaves space for creative chatter.

How did your photography story begin?

SW: That was an early passion. I started loving art right from a very young age. I just sort of had a [pull] to create pictures. And when I had to start thinking about what I wanted to do for a living, and told my parents I wanted to go to art school, I think they broke out in a cold sweat [laughs]. And so they said, “what about photography?” You know, “the wedding guy, he’s still making a living.”

So I went and bought my first camera at fifteen. It was a Pentax film camera. This was 1985. My parents are still friends with the gentleman who sold it [to me], and he’s still a photographer; he’s in his late eighties now, and he’s still shooting.

So that’s how I got started, and then I went directly from high school to the Northern Alberta Institute of Technology in Edmonton and studied the two-year photography program there. And it’s been photography ever since — except I was very selective about what I wanted to shoot. I knew after working for a wedding photographer in Vancouver that I didn’t want to shoot weddings [laughs]. So I dabbled in various different areas of photography, but I always had a side-hustle of some kind when things were a bit slow. I love animals, so I worked at veterinary hospitals as well.

When you got that first Pentax, what were you shooting?

SW: I found an old photo album, and I was shooting still life. I even have [one of] a beverage; I was shooting Mott’s Clamato juice in a Caesar with backlighting. My Dad had some old black powder pistols that I set up in a still life, so I recognize that as a food photographer, I’m basically doing the same thing [as I was back then].

And I think coming from an artist’s point of view, I always wanted to create something from nothing, rather than take pictures of something that’s already there.

So it was much more about staging a shot and posing: arranging all of the components into something.

SW: Absolutely. It’s been like that from day one. And it’s still my favourite part of what I do now.

How did you get your first paid shoot?

SW: Technically, my first pay cheque was assisting and printing for other people. I worked at a lab for a little while [in England], but then I started doing a lot of portraiture as a side hustle — kind of starting my own business. I wasn’t sure that I [loved] being a photographer five or six years after moving back to Canada, because I’m not a huge fan of street portraits. I think branding stuff calls to me more than family portraits. [But] Red Deer wasn’t the place for commercial photography.

Where does the name Jinsei come from?

SW: I’m a martial artist as well [as a photographer]; I have a black belt in karate. And jinsei means “life” in Japanese. I got into school photography at one point, and when I sold my school photography contracts, they wanted my business name with it — at the time, it was called Imagine That Photographics — so I had to come up with a name real quick, and Jinsei is the one that I loved. You know, photography encompasses all of life — it doesn’t matter what genre you’re doing, whether it’s landscapes, babies, food, it’s all recording life in some fashion.

Your work is best known for commercial photography: food and branding. What’s the biggest trick to food photography?

SW: There’s a couple of things that are almost in reverse to the rest of photography. One, we want to create texture with our light, rather than smoothing all the flaws and wrinkles out. I start with a lighting system or look for the available light that will create texture in the best way, and the other is to know that what you see with your eye is very, very different than what the camera sees, because we’re working at [such] close [range]. I do a lot of macro photography, and if you move something a millimetre on set, it looks like five on camera. So getting used to the idea that you literally just tap an object to move it.

And then scale is the other thing. My Mom and my sister-in-law were helping [on a shoot], and I have these tiny little kids’ antique chairs, and she’s like, “what do you use those for?” And I’m like, “for food photography.” And so I showed her a picture of a great big ham that I’d photographed on a table setting, and that child’s chair looks like an adult chair. So a lot of things in scale look very strange if you go full-size.

I teach a food photography course. It’s [about] understanding the psychology of colour, how some food looks great — you might have a beautiful plate, but it photographs poorly. There’s all these little details, and I think that’s the difference. We’re looking at so many tiny little elements in food photography as opposed to the big picture. And it takes extreme patience.

SW: I have the blessing of teaching a beginner digital photography class, and I get to answer that question frequently in my “philographer” way, as I’ve been labeled: a philosophical photographer [laughs]. To me, what makes a good photograph… the technical side is light. Being able to see light and the psychology of how light creates your story.

The second thing is [the] story. Whatever that story is, whether it be a landscape, or a portrait, or a food shot, does it evoke an emotion in some way? And it doesn’t necessarily have to be a positive emotion. It can be uncomfortable, too. And that’s an important thing.

What makes a good photographer is just looking and not settling on the first thing that you see. Every time I teach my beginners, they tend to shoot really wide to start with, and I just say, “get a little closer. And if you think you’re close enough, just get a little closer.” I show a lot of examples of how a shot can be good at one distance and great at another distance. And I just encourage them to keep playing. The average height between all people, men and women, is about 5’7”, and I always tell them, “don’t take a picture from the height of 5’7”. Get down, get up, move around, and don’t settle on the first thing.”

The other thing I teach is to pretend that you’re shooting film, meaning it’s going to cost you $1.50 every time you click the shutter. Because I find the digital photography world has made people not look first — they trigger the shutter before they really look. And when it’s expensive, then you stop and compose first. And I still shoot like that with my food photography — sometimes the camera [doesn’t] come out until the very last minute. I’ve done all the staging first, I see the light, see the texture, and then I pull out my camera.

What’s the most rewarding part of teaching people the work that you do?

SW: It’s watching the light bulbs go on. Right from the beginners, when they actually get their tool to translate their vision, and you see the click where they understand depth of field and F-stop, for instance. And then when it gets into the specialty things, it’s just the freedom for them to play. The food photography classes are mad [laughs]. The first day is theory, demo, collaborative shoot. I’ll give a boring brown food, like a beef bourguignon, and together, we make it stand out. And the second day, I take all of my surfaces, and plates, and props, and we bring all kinds of food. I basically let them go shopping: so they pull a surface, they pull a plate, they bring in their food, they learn some styling techniques, and we just get in there and create freely. And it’s insane, but it’s so much fun.