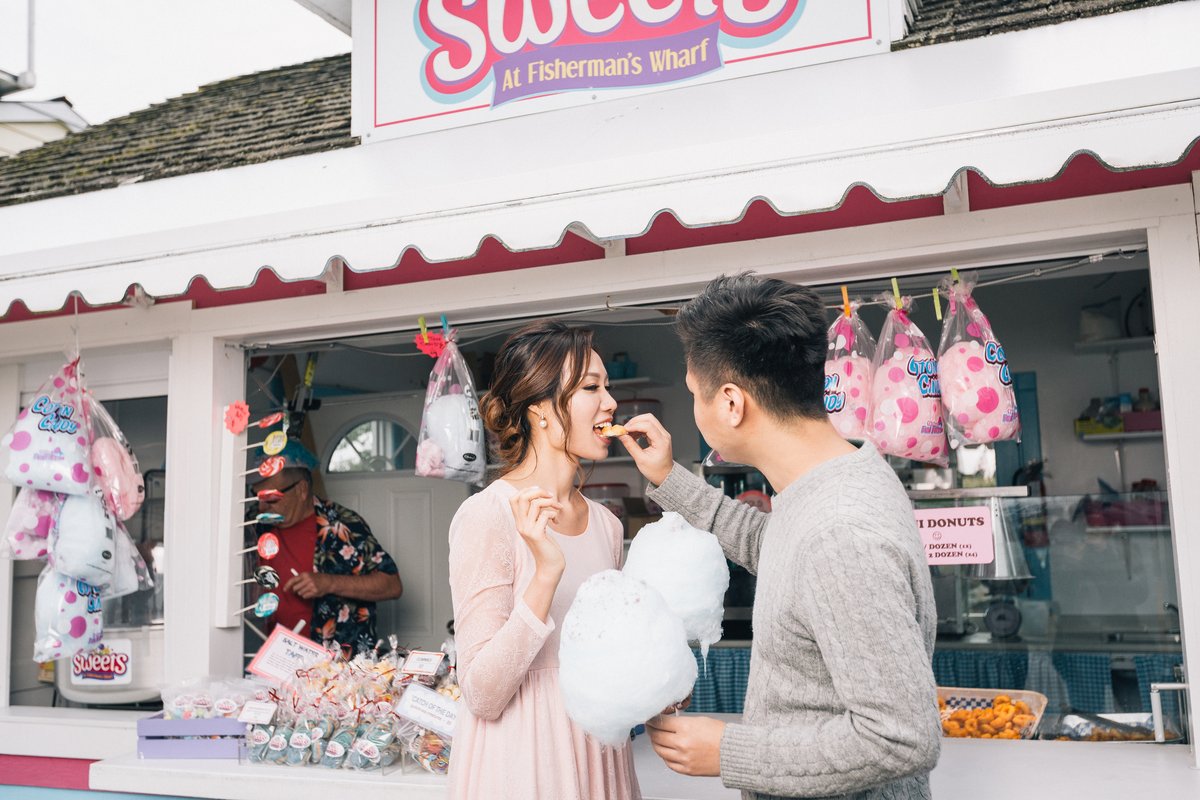 We couldn’t have asked for more out of a Pre-Wedding session then what we got with these two!  This shoot saw the Focal team travel around Victoria starting from Schwartz bay at 9 am and finishing up at parliament just after sunset.  This shoot had us going all day but allowed us to create an incredibly unique and lasting experience for this lovely couple from Hong Kong. We got to show them the different sides of Victoria from Beacon Hill Park and Fisherman’s Wharf all the way to Hatley castle.  We even had the pleasure of meeting Jerry (the horse) who got to show the couple the inner harbor to Beacon Hill Park. One of the most memorable moments from this shoot was our experience at Fisherman's Wharf. Just after we finished the carriage ride with Jerry we were able to explore the many different shops across Fisherman’s Wharf.  As we were looking around we found a candy shop that made a perfect backdrop for the stunning couple.  While we were setting up the owner of the shop prepared cotton candy and mini-doughnuts for the entire team! During this shoot, he cracked jokes and made the experience for everyone involved truly special. This left a lasting impression on everyone and made this happy couples day even more magical!!  Have a look below to see the amazing time we had together!

5 tips for starting a photography blog

As a photographer, a blog is an easy and fun way to engage with potential customers and other photographers. So, if you have ever asked yourself, is it even worth it for me to start a blog? The answer is yes! Here are 5 essential tips to help you start your photography blog.
READ MORE
September 9, 2020

6 tips for becoming a full-time photographer

Do you dream of making the transition from part-time to full-time photographer? Do you have no idea where to start? Before quitting your day job and pursuing photography full-time, read these helpful tips with insight from Marlboro Wang, one of Victoria, BC’s top photographers and a Focal partner.
READ MORE

Success! Thank you for subscribing.
Oops! Something went wrong while submitting the form.
For Customers
How it WorksTrust and SafetyFAQPoliciesTerms of Service
For Photographers
Focal PlatformLoginPricing Free MentorshipFAQPoliciesTerms of Service
Company
AboutBlogFocal UniversityContactCareers
Contact
contact@bookfocal.com+1 833 253 62251017 Fort St. Victoria BC Canada V8V 3K5